How Many To Do Lists Do You Actually Need?

I think this is an age old question with pretty much anything that deals with quantity, volume, or any other measurable unit: How much or how many is enough? What is the limit? People have an inherent desire to want a lot but I can guarantee that having a lot is not going to do any more good than having enough.

There is always a threshold that when crossed diminishes the benefit or advantage of having something. In addition, having too much or too many of anything can have unintended consequences that you would never desire. There is always a price you pay, not just in the literal sense but in a metaphorical sense as well.

For instance, a good example that comes to my mind is when you subscribe to cable television. You have a tendency to get too many channels including paid and premium channels because you think you can watch all of them. The reality is that you've got limited time to watch all channels and you can’t watch more than one channel at any given time.

The consequence is you pay a lot of money for something you don't use and you don't enjoy it because you are likely to flip between the channels most of the time trying to decide what to watch. My point is you have to recognize when too many is too much. It is ok to say no to have too many or too much of anything.

It is no different with to do lists. To do lists are there to help you navigate your busy schedule or to get things done on time. They are there to take the stress out of your life, make you feel enjoyable, and fulfilled in your daily life.

When you look at your to do list you should not feel threatened, dreaded, or put off by it because it is too many and unmanageable. How many times have we looked at something that is not easy to deal with and said “Oh, well I'll deal with it later, it is just too much to handle it right now.” That's exactly what I am talking about. To do lists should be inviting not repulsing.

Whatever you do it’s important that you feel comfortable with the list and that it works the way it’s designed to – i.e., help you manage your tasks without putting too much stress on you or your schedule.

Based on my experience the first thing that you should do is to come up with as many to do lists as you find logical to have without worrying about whether they are too many or not. After this is done you need to evaluate each to do list to make sure if you really need it.

It could make logical sense to combine one or more to do lists as you go through them. No matter what you do your to do lists have to be a logical and sensible grouping of similar tasks. This exercise is to determine what list is valid and which isn’t without worrying too much about whether you have too many lists.

After you've weeded out lists that you don't really need and merged them with other to do lists or abandoned them completely, the next step is to actually look and decide if you still have too many of them.

The reason why you create to do lists is so you can group your tasks and make it easy to navigate and locate them. This will save you tremendous amounts of time when working with your to do lists, especially if you have multiple projects going on.

So in this step you take a hard look at the number of to do lists. It’s hard to give you a number of to do lists you should be aiming for because it’s highly individual, my suggestion is to limit your to do list to one screen length so you don't have to scroll down the list to get to lists hidden from your direct view.

After you've removed or merged more to do list to lessen the total number of them, your list will definitely become more manageable. So, at the end of the day, your goal is to keep the number of to-do lists on a manageable number that you are comfortable with.

You can organize all your tasks and notes with our specialized todo list program. 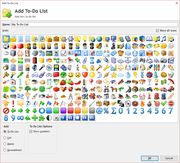