While the task organizer Task Coach has a motto "your friendly task manager", it might not be so friendly. It has quite a lot of features, but it’s not simple to use by any means. Building complex software is easy, but building something powerful and still simple and easy to use proves to be very challenging for the Task Coach developers.

Task Coach is unnecessarily very complex and hard to use, full of many design flaws. Its design is quite chaotic - if not random. To give you just one example, the toolbar has the "Cut" operation shown as the first icon - but in reality, cutting tasks will be done very rarely. "Add Task" would be much better first icon in the toolbar. Drag and Drop (when reordering tasks) also doesn't work as expected.

While Task Coach might be suitable for students of Computer Sciences on a zero budget and a lot of spare time (so they can figure out its non-intuitive design and behavior, and configure it to make it somewhat usable), it’s probably not a good choice for most.

People not working in the IT industry will especially find Task Coach difficult to use. To give you another example - if you want to create a global hotkey to add a task, you have to install a 3rd party script/macro utility and configure it. Task Coach has no inbuilt global hotkeys!

Sadly, using Task Coach can add to your stress, not help you reduce it!

Because of the bad user experience, a lot of people who tried Task Coach are looking for a Task Coach alternative - a "better" Task Coach so to speak.

Swift To-Do List is a much better Task Coach alternative, for many reasons. Download it right now and get started in less than 30 seconds.

Swift To-Do List is extremely intuitive and easy to use. It has very simple and efficient design, loved by thousands of customers. It also has more features than Task Coach.

The advantages of Swift To-Do List over Task Coach include (and mind you, this is just a few examples): 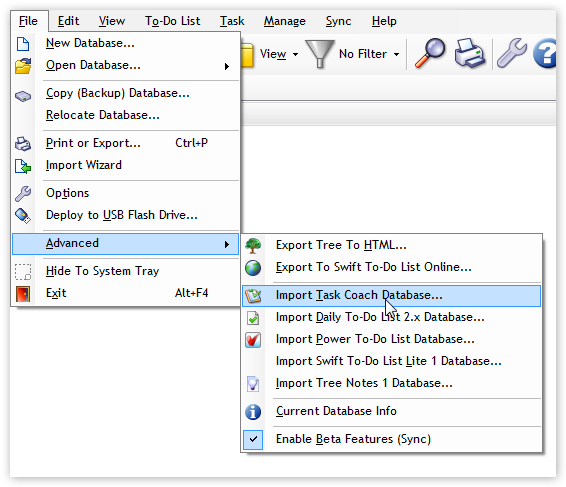 Being organized has never been so easy

Swift To-Do List is the number one to-do list software for Windows. With over 500.000 downloads and customers in 93 countries, it is becoming the first choice for busy people who don't want to go insane by juggling everything in their heads.

You can finally get all your tasks and notes in one place, then enjoy your newly found peace of mind.

Organizing has never been so easy and fun. (Yes, "fun" is a word that Swift To-Do List customers use quite often - download Swift To-Do List and discover why! Maybe it has something to do with the inbuilt library of 144 colorful carefully chosen icons that you can use in the to-do list tree.)

You can organize all your tasks and notes with our specialized software, better than Task Coach.

Download this Task Coach alternative today and immediately reap all the benefits. 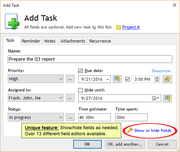